The Numbers of Cloth Diapers

I am an accountant and I like data analytics. Yes, I have an entire spreadsheet dedicated to cloth diaper numbers.

Alright, let's start with my whole stash graphic. Quantity is represented on the inside pie and $ value spent on the outside pie. Clarification on the terms is at the end of the post. 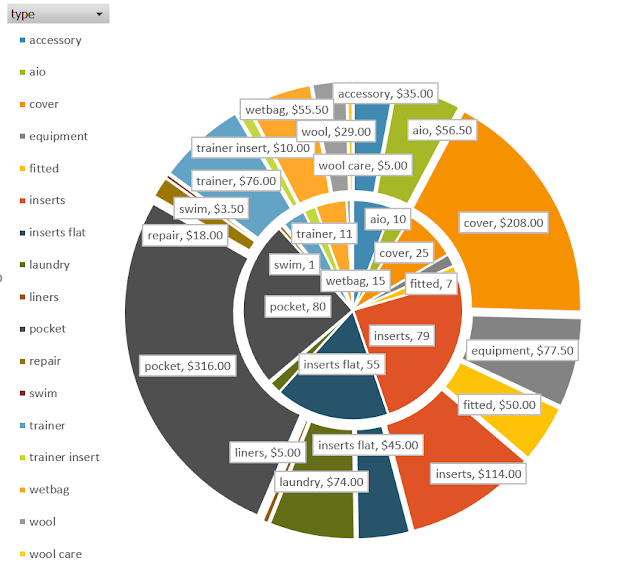 I started with covers and flats when J was 5 weeks old. We used covers until about 10 months old, then we discovered pocket diapers. I purchased a second set of pocket diapers for daycare to use (see info later). At 18 months, I discovered fitteds and aio for nap time absorbency when J started peeing out of his diapers. At about 26 months, I needed to buy a larger size of diapers since J had outgrown all the one size diapers (see info later). Finally, I invested in potty trainers when J was about 36 months old.

I spent a total of $1,178.00 and I am the first to admit that this was excessive. A lot of families, I believe, can buy covers and absorbency for under $500. A few things added to my cost: I had two stashes - one for weekends at home and one for daycare; additionally, little man J didn't potty train as early as anticipated and he outgrew one size diapers. Without these factors, I would have had my core stash (numbers explained later). Oh, and adding to my numbers, I also became a little addicted to trying all different styles and brands. It was very intriguing, the differences in fit of the diaper.

On the flip side of that cost number, are products that can be used again with future children and items that can eventually be sold to other moms. I would very conservatively estimate that I could regain 25% of the cost when sold.

I purchased both new items and used items. The next graphs show the breakdown per each (quantity in red/yellow and purchase price in blue/green. 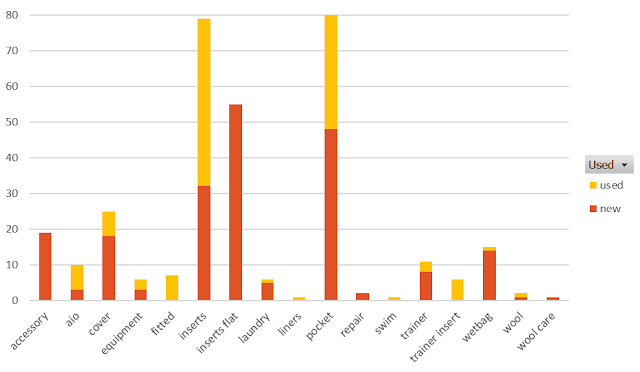 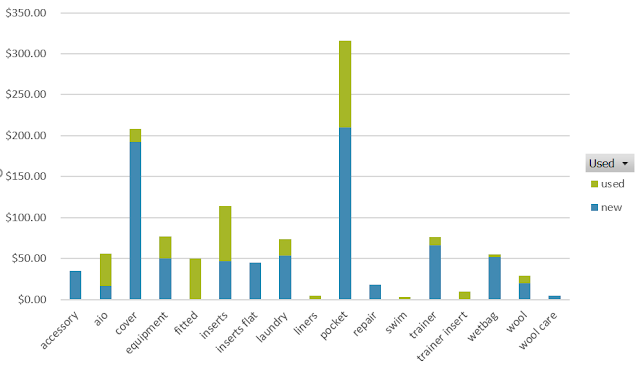 I was lucky enough to find a daycare that was open to using cloth diapers. Since they were accommodating my choices, I wanted to make the process as simple as possible for the teachers. I decided to buy pocket diapers with hook and loop closure. This made the cloth diapers very similar to disposables diapers. I bought enough diapers so that I wouldn't have to fold and stuff them during the already busy week. I also sent two wet bags each day to daycare: one for pee dirty diapers and one for poo dirty diapers. 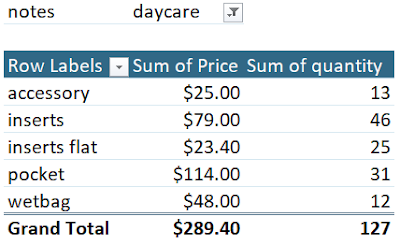 Little Man J was always a bigger baby - 99th percentile in both height and weight. At 26 months, he was outgrowing his one size diapers in the rise and I needed to buy larger sized diapers. Fortunately, this was also around the time of Black Friday sales and I found a great deal on pocket diapers. We wouldn't have made it to potty training in cloth diapers without the larger sized diapers.

Had I not needed to buy the separate daycare diapers and bigger sized diapers, I would have spent $744.10 on a diaper stash. 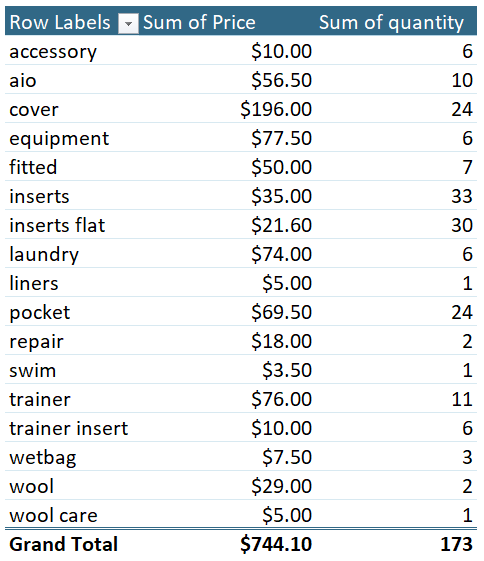 The big question is: am I saving money on cloth diapers. There is already a lot of information out there on the cloth vs disposable debate. There are also different methods of calculating the cost of disposable diapers. I will leave the complexity to others and keep it simple.

The cost of cloth diapers also includes the cost of doing laundry. We are on a well and septic system so do not pay a municipality for water/sewer. We likely used more energy to run the washing machine, but it was not very much - I always hang dried all the diapers and inserts and the diaper washing machine is smaller capacity. I did not notice a difference in electric bill from times that I was regularly washing diaper laundry to after J was potty trained. The energy guide sticker on the diaper washing machine says it costs $80/year. For this purpose, let's say I spent an extra $100 per year between the washing machine, well pump, and lights in laundry room. That equals $300 more over 3 years.

At the end of our diaper journey, I didn't really save anything. However, I do have resale value on the diapers ($300 or more). The cloth diapers are in very good condition and can easily be used through another child. The real cost savings will come if we are blessed with another baby.

aio: all in one diaper - the absorbency is built into the waterproof cover.
cover: waterproof diaper cover
equipment: dirty diaper storage - I used diaper pails and hanging wetbags
fitted: diaper absorbency that fits around baby like a diaper, but still needs a waterproof cover added
inserts: diaper absorbency that is shaped to lay inside the waterproof outer part of a diaper - I mostly used hemp and bamboo materials
inserts flat: diaper absorbency that can be folded and fastened around baby or folded and laid inside the waterproof outer part of the diaper - I mostly used flour sack towels and organic cotton.
laundry: anything related to laundering diapers - this includes a separate washer and cost of detergent
liners: fleece liners to help with poop cleaning
pocket: a type of diaper that has an inner lining and an outer waterproof material. Absorbency is inserted between the inner lining and outer waterproof material.
repair: related to repair of cloth diapers - elastic
swim: specific diaper cover to use for swimming
trainer: diaper systems used during potty training - I tried many different brands since my son potty trained a little later than his friends (over 3 years old).
trainer insert: specific inserts for the potty trainers
wetbag: zippered bag to hold dirty diapers
wool: diaper covers that are made of wool - I discovered these late, but really enjoyed the outcome
wool care: related to care of wool covers - I used a specific wool wash
Labels: Cloth Diapers